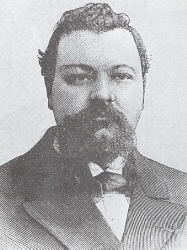 Gérard-Anaclet-Vincent Encausse, the son of a French father and Spanish mother, was born in La Coruña, Spain in 1865.  (Only later would he adopt the name Papus.)  He and his family relocated to Paris in 1868.

Encausse was admitted to medical school in 1885.  In addition to his studies there he frequented the Bibliothèque Nationale [French National Library], where he immersed himself in esoteric literature, including old grimoires (magical texts) and the works of Éliphas Lévi, Paul Christian, Hoene Wronski, and others.

Outside the library, he soon made the acquaintance of numerous leading contemporary occultists, including Saint-Yvres d’Alveydre, Stanislas de Guaïta, Joséphin Péladan, and F.-Ch. Barlet.  Just as importantly, he soon turned to writing, typically using the pseudonym Papus, the name of the genius associated with physicians in The Nuctemeron, a work attributed to the legendary magus Appolonius of Tyana, which appeared in Lévi’s Dogme et rituel de la haute magie [Transcendental Magic: Its Doctrine and Ritual] (1854-55).

Illustration (above): The young Papus (from Decker, DePaulis, & Dummett’s A Wicked Pack of Cards, copyright © 1996 Decker).  Click the image for a larger one.

All told, Papus authored 160 titles, mostly on esotericism, ranging from magazine articles to lengthy treatises.  For example, in his book Traité élémentaire d’occultisme [Elementary Treatise on Occultism] (1888), he explored a wide variety of subjects, including astral influences on humankind; the history, characteristics, and missions of human racial groups; significant spiritual traditions (e.g., Hinduism, Buddhism, Judaism, and Christianity); and secret societies (e.g, the Templars, the Rosicrucians, and Freemasonry).  Little of his output, however, has been translated into English.

Additionally, he founded two important occult journals, L’Initiation [Initiation] and La Voile d’Isis [The Veil of Isis].  His son, Philippe Encausse, with good reason sometimes referred to his father as the “Balzac of occultism”.

Doctor of Medicine, Leader of Occultism

Although he never became a regular freemason, Papus joined many other organizations dedicated to esotericism, frequently serving in leadership positions.  They included the Theosophical Society, the Hermetic Brotherhood of Luxor, the Golden Dawn’s Athahoor Temple in Paris, and the Ordre Kabbalistique de la Rose-Croix [Cabalistic Order of the Rosy Cross].  He also founded the Groupe Indépendant d’Études Ésotériques [Independent Group for Esoteric Studies] and reconstituted the Martinist Order, an influential gnostic Christian society, which had its roots in the teachings of the late eighteenth- and early nineteenth-century French mystic Louis Claude de Saint-Martin.

Incredibly, despite his time-consuming pursuit of esotericism, he continued his medical studies and received his doctorate in 1894.  As a physician he ran clinics in Paris and Tours, where his methods included homeopathy and other forms of alternative medicine.

However, Papus is best remembered as an occultist who promoted mysticism, the Tarot, and magic.  With regard to Tarot, he viewed it as both a repository of ancient esoteric wisdom and a tool for divination.  In 1889, when only twenty-four years old, he published his major statement on Tarot, Le Tarot des bohémiens: le plus ancien livre du monde [The Tarot of the Gypsies: The Most Ancient Book in the World].  However, English-speaking readers commonly know it by the incorrectly translated title The Tarot of the Bohemians.

In it, Papus clearly alleged that the Tarot originated in ancient Egypt.  “Yes; the game of cards called Tarot, which the Gypsies possess, is the Bible of Bibles.  It is the book of Thoth Hermes Trismegistus, the book of Adam, the book of the primitive Revelation of ancient civilizations,” he wrote.

He further claimed that it contained a detailed, systematic exposition of Cabala (especially the name of God, YHVH), astrology, numerology, theogony, androgony, cosmogony, and more.  Typically he presented his ideas dogmatically, offering neither convincing evidence nor rational argument.  However, he was fairly systematic and his ideas, for the most part, reflected eighteenth- and nineteenth-century French esotericism.  The book was illustrated, in part, with the Major Arcana drawn by Oswald Wirth, a French-speaking Swiss, who would eventually become an important Tarotist in his own right.  Additionally, Papus discussed divination by Tarot, but he gave it short shrift and condescendingly viewed it primarily as a pleasant pastime for ladies.

However, in 1909 he did an about face when he published Le Tarot divinatoire: clef du tirage des cartes et des sorts [Divination by Tarot: Key to Reading Cards and Lots].  He devoted the entirety of this book to practical, detailed discussion of divination by Tarot, including reproduction of a lengthy compendium of divinatory meanings which depend from the eighteenth-century French Tarotist Etteilla and his followers. 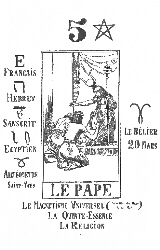 Additionally, a significant portion of the book was devoted to drawings for an entire Tarot deck by Gabriel Goulinat (see illustration, right).  They often included Egyptianized figures and numerous correspondences with other metaphysical systems, e.g., alphabets and astrology, and carried key words or phrases to facilitate divination and discussion of esoteric philosophy.

Between his books on Tarot, Papus also published a lengthy study titled Traité méthodique de magie pratique [Methodical Treatise on Pratical Magic], in which he explored many aspects of magic, including astrology, talismans, summoning spirits, and even folk practices.  Like many magi of the time, he also discussed the application of will as an essential part of magic.

Illustration (above): Le Pape [The Pope] from the Papus-Goulinat Tarot (1909) (in a contemporary edition of Papus’ Le Tarot divinatoire: clef du tirage des cartes et des sorts, published by Éditions Dangles).  Click the image for a larger one and an explanation of correspondences.