The Magus Turns to Tarot

Integral to Lévi’s synthesis was Tarot, which he dogmatically described as the ancient Egyptian “Book of Hermes”.  He enthusiastically embraced Tarot as “the universal key of magical works” and, as such, “the key of all ancient religious dogmas”, including even the Bible.  As was often the case, Lévi failed to provide even one shred of evidence for his position.  Nevertheless, the magus confidently extolled Tarot as “a true philosophical machine” and “a veritable oracle”, and convinced others to do likewise.

Furthermore, he integrated Tarot with Cabala (an influential type of Jewish mysticism) and the Four Elements.  In Dogme et rituel, he was the first to write that: 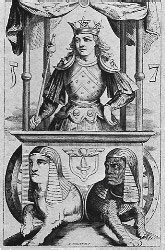 Once again, Lévi failed to present any convincing evidence or documentation concerning the authenticity or history of these Tarot correspondences; rather, he simply dogmatically stated them.  Whether he invented them or was reporting on a pre-existing system is unknown.  Certainly, no evidence exists to support the purportedly ancient origins of these correspondences.  However, a significant number of Tarotists use them or similar ones to this day.

Although Lévi published only one modern Tarot card, the Chariot, his influence on designers of decks was significant. For example, his version of the Chariot (see illustration, above) included for the first time two Egyptian-style sphinxes (one light and one dark) in lieu of the traditional horses.  Oswald Wirth and A.E. Waite included similar sphinxes in their decks, as have many contemporary designers.  Additionally, his drawing in Dogme et rituel of Baphomet, an idol which the Knights Templar were wrongly accused of worshiping during the Middle Ages, has often served as the basis for the Devil Trump.

Illustration (above): Lévi’s drawing of the Chariot (from his Dogme et rituel [1854-55]).  Click the image for a larger one.

Typically, however, Lévi’s verbal descriptions from Dogme et rituel are what impacted designers.  For example, he wrote that:

Granted, some decks designed after Lévi have none of these elements; however, many have most, including Rider-Waite-Smith and closely related packs.  Every time a contemporary designer or reader uses certain correspondences (e.g., Pentacles  = Earth, etc.); interprets the High Priestess as the Moon or Isis; relates the Empress to Venus; or meditates on the lemniscates over the heads of the Magician and Strength, they are indebted, in part, to Lévi.

After publication of Dogme et rituel Lévi earned a comfortable living, writing books on magic and other aspects of occultism, providing private instruction in magic, and generally leading the life of a working magus, e.g., by making talismans or carrying out specified operations on behalf of clients.  In 1860 he published his Histoire de la magie [History of Magic], which helped to consolidate his position as one the leading occultists of his day, although it contained much which was inaccurate and poorly documented.

As he aged his health declined precipitously and he was reduced to poverty; however, one of his devoted students saved him from complete ruin.  In the spring of 1875, his condition worsening, he accepted the last rites of the Catholic Church and died a few hours later.  The magus had sought to reconcile magic and religion to the end, and the son he never saw in life accompanied his body to its final resting place.

Lévi’s contribution to modern occultism or Western Esotericism was significant, impacting Tarot and, more generally, magic.  “Lévi’s most startling innovation was in connecting the Cabala with the Tarot.  Modern occultists take this connection so much for granted that it tends to be forgotten that there is absolutely no historical evidence that the two were in any way related,” historian Christopher McIntosh rightly noted in his Eliphas Lévi and the French Occult Revival.

Similar statements could be made about other aspects of Tarot which modern occultists take for granted.  Nevertheless, Lévi’s approach to the cards carries significant weight to this day.  Ultimately, he impacted Tarotists not because his vision of Tarot was historically accurate (because it wasn’t), but because he made something new and compelling of it.

More generally, Lévi was important because he helped to change how some people perceive magic.  Lévi, McIintosh rightly observed, presented magic “as a way of drawing the will through certain channels and turning the magician into a more fully realized human being.”

Although his sensationalism and penchant for literally inventing history often detracted from this central message, his ideas still served as an important foundation for the edifice of modern magic (including Tarot) to be built by the next generation of magi.  Thanks to his contribution to the rehabilitation of magic and integration of Tarot into the larger domain of Western Esotericism, Lévi would serve as a guiding light for them.

Lévi, Éliphas.  Transcendental Magic: Its Doctrine and Ritual.  An online version of this book.