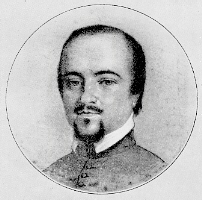 Alphonse-Louis Constant, the son of a poor shoemaker, was born in Paris in 1810.  (Only later would he adopt the name Éliphas Lévi.)

He was a bright, hard-working student and a pious Catholic with mystical bent; he entered the seminary Saint-Sulpice, where he trained for the priesthood and was ordained a deacon in 1835.  Early duties as a member of the clergy included instructing girls from the seminary’s environs in catechism.  He soon fell in love with Adèle Allenbach, one of his charges.  Although their relationship remained platonic, it changed Constant’s life forever.

Illustration (above): Constant in 1836, drawn by a friend (from Éliphas Lévi and the French Occult Revival by Christopher McIntosh, copyright © 1972 McIntosh).  Click the image for a larger one.

He wrote in in his book Chansons et poésies [Songs and Verses] (1845):

“My ideas were overturned. . . .  I did not love Adèle as one loves a woman – Adèle was still almost a child – but through her I had felt awaken in me the imperious need to love; I understood that all the religion in my soul was based on this need, and I could not take my vows before the altar of a cold and egotistical cult without remorse,”

Contrary to occasional incorrect reports, he never became a priest; he declined ordination as one and left the seminary.  Shortly thereafter, his widowed mother committed suicide, leaving him distraught.

Nevertheless, Constant had to earn a living.  After a brief stint as an actor, he taught in a Catholic school and, paradoxically, assumed the mantle of political radical, writing the controversial book La Bible de le liberté [The Bible of Liberty] (1841).  In response, the courts found him guilty of preaching impiety and subversion for which he spent eight harsh months in prison.

Following his release, he briefly worked as an artist in Choisy and later as an assistant to the clergy of the diocese of Evreux, but was forced to leave the latter post when the public learned that he was the author of Le Bible de liberté.

Severing his relationship with the clergy for good, he returned to Paris, where he resumed writing, occasionally published, and took as his lover Eugénie C (her surname remains unknown).  He first met her in Evreux, where she was an assistant headmistress of a girl’s school.  The plot thickened when the thirty-five-year-old Lévi began a secret affair with one of Eugénie’s students, the seventeen-year-old, Noémi Cadiot.  He ultimately abandoned Eugénie and married Cadiot in 1846.  Three months later, Eugénie, estranged from Constant, bore him a son whom he would never meet.

Constant continued to write books, including religious texts.  However, married life and his previous stint in prison did not temper his radical politics.  He soon gained notoriety for controversial, socialist treatises, and, when the courts found him guilty of provoking scorn and hatred between the social classes and against the government, he spent another six months in prison.

Still, upon his release, Constant persisted in writing polemics and published Le Testament de la liberté (The Testament of Liberty) in 1848, the year revolution rocked France and many other European countries.  In it, he assumed a revolutionary stance and hinted at the future direction of his religious and metaphysical ideas: “We wish to regenerate and universalize the religious sentiment by the synthesis and rational explanation of symbols, so as to constitute the true Catholic Church or the universal association of men.”

Here are several embryonic themes with which Lévi would grapple most of the rest of his life: the “true Catholic Church” (i.e., the universal religion and association of humankind) rationally realized through synthetic symbology.  The only thing missing is the overt mention of magic.

A New Career, a New Name

At this time the great Western magical tradition which stretched back to the Renaissance and earlier had long fallen into general disrepute; most educated Europeans scoffed at it.  Nevertheless, Lévi studied magic, fell in love with it, and began to use what he described as the Hebraicized form of his name (by which he would be best known): Éliphas Lévi.

Illustration (above): The mature Lévi.  Click the image for a larger one.

In 1853 Lévi’s wife deserted him for another man.  Perhaps, in part, to distract himself, Lévi travelled the following year to London where, according to him, he invoked the legendary ancient magus Apollonius of Tyana to physical appearance.  To do so, after many days of preparation, he donned magical vestments, and entered alone into a room furnished as a temple.  He burned fragrant woods on its altar and invoked the long-dead magus.

“The smoke spread, the flame caused the objects on which it fell to waver, then it went out, the smoke still floating white and slow about the marble altar; I seemed to feel a kind of quaking of the earth, my ears and my heart beat quickly. . . .  Three times with closed eyes I invoked Apollonius.  When I again looked forth there was a man in front of me, wrapped from head to foot in a species of shroud which seemed more grey than white; he was lean, melancholy and beardless. . . .”

Lévi reported that he repeated this famous operation twice more with success.  Reflecting on these invocations, he wrote:

“Am I to conclude from all this that I really evoked, saw, and touched the great Apollonius of Tyana?  I am not so hallucinated as to affirm or so unserious as to believe it. . . .  I do not explain the physical laws by which I saw and touched; I affirm solely that I did see and I did touch, that I saw clearly and distinctly, apart from dreaming, and this is sufficient to establish the real efficacy of magical ceremonies.”

For the record, no one else witnessed the operations.

The quoted reports are from Lévi’s most important book, the seminal Dogme et rituel de la haute magie (Transcendental Magic: Its Doctrine and Ritual) (1854-55), which was so popular that it went into multiple editions.  In it, he achieved a synthesis (his detractors would say mish-mash) of Western magic, including Cabala, divination (e.g., Tarot), astrology, alchemy, talismans, prophecy, and much more.  He enthusiastically extolled magic as a legitimate spiritual path and potent all-embracing discipline:

“Magic is the traditional science of the secrets of nature which has been transmitted to us from the magi.  By means of this science the adept becomes invested with a species of relative omnipotence and can operate superhumanly – that is, after a manner which transcends the normal possibility of man.”

He also confidently positioned magic as a discipline compatible with both science and Christianity, and capable of unifying both.

“Science . . . is at the basis of magic, as at the foundation of Christianity there is love, and in the Gospel symbols we see the Word incarnate adored in his cradle by three magi, led thither by a star. . . .  Christianity owes, therefore, no hatred to magic. . . .”

On the other hand, his writing in Dogme et rituel, as elsewhere, was often characterized by sensationalism, hyperbole, poor scholarship, and factual error.