TOPIC: ORIGINAL USE OF TAROT CARDS 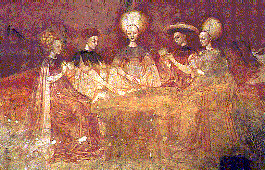 Current Historical Understanding: Written records tell that the tarot was regularly used to play a card game similar to bridge.  The game was popular throughout much of Europe for centuries and is still played today, particularly in France.  Early poets also used the titles of the trump cards to create flattering verses, called tarocchi appropriati, describing ladies of the court or famous personages. Although it is possible that tarot cards might also have been sometimes used for other purposes, there is no clear evidence of such use until long after the cards were invented.  Records from a trial in Venice in 1589 suggest that tarot may have been associated with witchcraft (at least in the minds of the accusers) at this date, about 150 years after the appearance of the tarot.  After this, there are no references connecting tarot with magic or divination until the 18th century.  (See also next three questions.)

Illustration (above): Detail of a frescoe, commonly called The Tarocchi Players, by Giovanni da Vaprio (mid-15th century) (from The Game of Tarot by Michael Dummett, copyright © 1980 Dummett).  Click the image for a larger one.

Inaccurate: Tarot was not used for divination before Etteilla and Court de Gébelin around 1781.

Current Historical Understanding: There is evidence of such use, but it is fragmentary and suggestive rather than conclusive.  Tarot was used as early as the 16th century to compose poems describing personality characteristics (tarocchi appropriati).  In one case (1527), the verses are presented as relating to the person’s fate.  There are records of divinatory meanings assigned to tarot cards in Bologna early in the 1700s.  This is the first unambiguous evidence of tarot divination as it is commonly understood.  However, it is known that ordinary playing cards were connected with divination as early as 1487, so it is reasonable to conjecture that tarot was also.  From the 1790s with Etteilla’s deck [see illustration, above] we find tarot design being modified specifically to reflect divinatory and esoteric meanings.

Illustration (above): Eclaircissement [Enlightenment], which is equivalent to the Sun, from Etteilla’s Tarot (adapted from Grand Etteilla: Ou Tarots Egyptiens, based on Etteilla’s original deck of c. 1788, published by Grimaud).  Click the image for a larger one.

TOPIC: OCCULT PHILOSOPHY AND THE ORIGINAL DESIGN OF THE TAROT

Inaccurate: There are no hermetic, heretical, or kabbalistic characteristics in the original tarot.

Current Historical Understanding: This topic is still open.  The early Italian Renaissance, which gave birth to the tarot, was a time of great intellectual diversity and activity.  Hermeticism, astrology, Neoplatonism, Pythagorean philosophy with roots in Alexandrian Egypt, and heterodox Christian thought all thrived.  Any or all of these may have left their mark on the design of the tarot.  Although it should be remembered that all of the symbolism of the tarot has close analogs in the conventional Christian culture of the time, many scholars today believe that these philosophies, which are foundations of occultism, were important in the design of the tarot.

Inaccurate: The tarot has always been a pillar of the western esoteric tradition.

Current Historical Understanding: The first occult writers to discuss the tarot were Court de Gébelin and the Comte de Mellet in 1781. For the first 350 years of its history, the tarot was not mentioned in any of the many books on occult or magical philosophy.  Following 1781, occult interest in tarot blossomed and the tarot then became an integral part of occult philosophy.

Inaccurate: The Hermetic Order of the Golden Dawn (or Éliphas Lévi, Papus, Zain, Case, etc.) knew the true astrological, elemental, and Kabbalistic correspondences to the Tarot and corrected previous errors.

Current Historical Understanding: There are many, many systems of correspondences for the tarot.  None can be shown to go back to the tarot’s origins, although the French tradition exemplified in the works of Eliphas Lévi predates the English tradition now familiar through the works of Waite and Crowley.  Most sets of correspondences have a rationale and system that make them meaningful and useful when studied within their own tradition. Correspondences are a matter of individual choice and of intention or adherence to a school of thought rather than right or wrong.

Inaccurate: The Waite-Smith (or “Rider Waite”) Tarot [see illustration, right] is the original, standard, or most authentic tarot.

Current Historical Understanding: The Waite-Smith deck was created in 1909, making it a relative newcomer in the almost-600-year history of the tarot.  A. E. Waite was a prominent member of the Hermetic Order of the Golden Dawn.  The deck owes much of its symbolism to that group and represents a departure from the earlier French tradition.  The artist, Pamela Colman Smith, contributed her own vision, especially in the innovative creation of fully illustrated scenes for the minor arcana.  For many years, the Waite-Smith deck was the only one readily available in the U.S., so it became familiar to whole generations of tarot readers.  There is actually no “definitive” version of the tarot.

The well-known Celtic Cross spread, publicized by Waite as “an ancient Celtic method of divination” is also relatively recent, although it was not invented by Waite.

Illustration (above): The Fool from The Rider Tarot Deck, designed by A. E. Waite and drawn by Pamela Colman Smith (1909) (copyright © 1971 U.S. Games Systems).  Click the image for a larger one.

SOME THINGS TO BE CAREFUL OF WHEN WRITING ABOUT TAROT HISTORY

The terms “major arcana”, “minor arcana”, “High Priestess”, and “Hierophant” are anachronistic when referring to the older tarot decks.  The historically appropriate terms are “the trumps and the Fool” (the Fool was not usually regarded as a trump), “the suit cards”, “Papess” or “Popess”, and “Pope”.  Likewise “pentacles” and “wands” are relatively recent substitutions for the traditional suit names of “coins” and “staves” or “batons”.

The original Italian titles of the cards were in some cases different from the later French titles (and their English translations) that have become familiar to us through the Tarot de Marseille and its descendants.  Also, the ordering of the trumps varied considerably in Italy where the cards originated; it is not known which ordering is the earliest one.  Even the number of cards in the deck varied a great deal!  So care should be used in making statements about the original meaning of the cards based on the familiar titles and ordering.

The intention of the original designer(s) of the tarot in selecting the symbols for the trump cards is unknown, although there are many conjectures, some more plausible than others.  Writers should avoid giving the impression that the intention is known or obvious.

Dummett, Michael, The Game of Tarot

Kaplan, Stuart, The Encyclopedia of Tarot, Vol. I & II

Sources of the Waite-Smith Symbols

Tarot Magick in the 16th Century