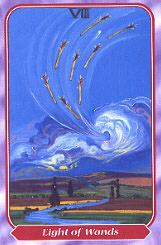 In addition to the these links, see the article A Beginners Guide to Tarot for further details about the following sites and others which may be particularly helpful to new students.  The article, which includes descriptions of suggested books, decks, software, and organizations, also may be helpful to some advanced students.

Illustration (above): The Eight of Wands from Spiral Tarot by Kay Steventon (copyright © 1997 U.S. Games Systems).

Aecletic Tarot by Solandia includes discussion forums and capsule reviews (with many images) of a wide variety of decks.

Books – Retail Sales (Used and Out of Print).  Many books on Tarot are out of print; however, you may often find them with relative ease and at modest cost by searching massive databases of used books offered for sale, such as Abebooks.com, AddAll, or Bookfinder.com.

Divination by Tarot: Introduction by B. Stafford comprises a brief compendium of divinatory meanings for each card.  You may download it as a text or Adobe Acrobat file.

Internet Sacred Text Archive by J. B. Hare includes, among many documents, a complete, illustrated, Web-based version of A.E. Waite’s classic The Pictorial Key to the Tarot.  Villa Revak also offers extensive excerpts from this work in Tarot Divination: Three Parallel Traditions.  For a brief review of the Waite’s book, click here.

Learning Tarot – An On-Line Course by Joan Bunning is a free Web-based course which offers a methodical introduction to Tarot.  Its content is very similar to the author’s book Learning the Tarot: A Tarot Book for Beginners.

Llewellyn Worldwide is a major publisher of Tarot books and decks in addition to New Age titles in general.  It also distributes many Lo Scarabeo decks in the U.S.

Reference Guide for Tarot Layouts (Tarot Spreads FAQ) by David C. Jones describes in detail a wide variety of ways to spread cards for purposes of divination and meditation.

SuperTarot by Paul Hughes-Barlow provides an introduction to the application of elemental dignities to reading Tarot, essays, and more.

Tarot at Teleperion Productions by Tom Tadfor Little.  This site and its sister, The Hermitage: A Tarot History Site, comprise a wide variety of articles, which include informative looks at Tarot history and classic decks.

Tarot Decks – Retail Sales.  The following sites are excellent sources for numerous decks, especially many which might otherwise be difficult to find, including in the U.S.: Alida, R. Somerville of Edinburgh, Il Trigono, and Le Valet d’Coeur.

[Tarot] Divination by Laren, is a brief compendium of divinatory meanings for each card.

Tarot Inspiration by Hans Logeskøv is devoted to exploration of the Thoth Tarot Deck.  It is not the best site on this list, but one of very few which discusses this important deck.

U.S. Games Systems is perhaps the leading publisher of Tarot decks and related products worldwide.  Its site includes descriptions and images of its many decks from traditional to trendy.

Wicce’s Tarot Collection by Gina M. Pace is a large site which includes brief reviews of a numerous decks (with many images), a humorous look at Tarot, a newsletter, numerous links, and much more.

Alt.tarot is a Usenet forum devoted to the freewheeling discussion of Tarot, which you may access with a news reader or the Web.  Caveat: flaming occurs regularly; both new and experienced Tarotists often take it on the chin.

ComparativeTarot is a friendly forum which provides an opportunity for Tarotists at all levels to study and compare a wide variety of decks.  The group observes a few rules, including prohibition of flaming.

TarotL is a group which provides an excellent forum for the exploration of a wide variety of Tarot-related topics, including Tarot history.  The group observes a few rules, including prohibition of flaming and blatantly commercial posts.

In addition to the aforementioned ComparativeTarot and TarotL, this center for discussion forums provides numerous other groups devoted to Tarot.
COMPUTERIZED READINGS

The following Websites offer computerized readings.  Unless specifically noted, they are are free, do not require registration, and offer: multiple decks (including a Rider-Waite-Smith), multiple spreads (including the Celtic Cross), and interpretive text.

Caveat: The following brief entries are descriptive; they do not imply approval by James W. Revak or Villa Revak.  Some Tarotists feel that computerized readings are of little value, because, unlike human beings, computers cannot think, feel, intuit, or converse.  For a more detailed discussion of the advantages and disadvantages of computerized readings, click here.

Instant Tarot Readings by AeonGlobe provides six decks, including the Thoth Tarot and Cosmic Tribe Tarot, and two spreads.  It does not offer the Celtic Cross.

Web Tarot by Llewellyn offers nine decks, including the Sacred Circle Tarot and Celtic Dragon Tarot, and seven spreads.  It does not offer a RWS deck.

Finally, you may wish to learn about CyberTarot by Edward A. Aviza.  It does not provide readings via the Web.  Instead, it is a software package for desktop computers.  To read a review, click here.

A variety of organizations exists which may be helpful to Tarotist; selected ones are briefly described below.  However, before you plunk money down be sure that the organization offers what you need and want.  Just because an organization has an impressive name and Website does not mean that it is reliable or will be helpful.  You may also wish to ask others who have had experience with a given organization for their advice prior to making a commitment.

Builders of the Adytum (BOTA).  Founded by renowned occultist Paul Foster Case, this well-known group reports that it is a “religious organization irrevocably dedicated to spiritual attunement through enlightened worship in the Tradition of the Western Mysteries.”  Among its many programs, it has long offered its own Builders of the Adytum Tarot deck by Case and Jessie Burns Parke and correspondence courses which teach Tarot.

International Tarot Society (ITS).  “Our purpose is to unite, educate and promote tarotists across the globe,” says this organization.  Offerings include conferences and conventions, some local chapters, and a newsletter.

The Tarot School.  This organization reports that it “has been created to give you a rich and continuous education in the many facets of tarot, while having fun with kindred spirits of a like mind.”  Offerings include correspondence and telephone classes, workshops, a degree program, a magazine, and a newsletter.