The Pictorial Key to
the Tarot of the King
of Cups in Tatters
By James W. Revak

We have long lamented over the sad fate of Our Pristine Tarot and Enlightened Commentary.  In recent centuries, you, my beloved children, have been led astray from them and Our pure wisdom contained therein.

In recent decades, you have been led even further astray by the self-styled hierophant, A. E. Waite, his “psychic” artist, Pixie Smith, and the product of their alliance, a “corrected” Tarot, which has become the most popular and least correct Tarot ever.  Waite, a purveyor of malted milk and the illegitimate son of a sailor (I am not making this up!) sought to enter the Temple of the Divine Fifi-Ho-Tep-Trismegista, position himself as Hierophant of the Occult Arts, and correct Our millennia-old Tarot.  He failed on all counts.  Rather than pierce the protective Veil of Our Sanctum Sanctorum, he died a beggar in the pronaos, where he told all who would listen (not many) that he alone possessed the “Secret Doctrine” and “true” Tarot because he alone possessed the “necessary mystical faculties with which to enter into intimate relationship with the Shekinah.”  In reality, he was popularly referred to as the King of Cups in Tatters.

Illustration (above): A. E. Waite as the King of Cups in Tatters.  Click the image for a larger one.

Worse, today a multitude of errors awaits the users of his book, The Pictorial Key to the Tarot and its popular companion deck.  We will highlight only a few of the most egregious in the following short syllabus of errors.

The following positions are condemned as errors which lead unwary Tarotists to fall into the Black Ever Rolling Abyss, wherein they ever delight in unintelligable images. 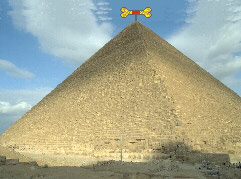 Illustration (above): The Pyramid of the Divine Fifi-Ho-Tep-Trismegista in the Valley of the Dogs, Egypt.  Some say that Her original Pristine Tarot and Enlightened Commentary are stored in a secret chamber below this structure.

Published this seventh day of the third month of the 6,327th year since Our giving of the Pristine Tarot and Enlightened Commentary to humankind.  Hagios, Hagios, Osorronophris.  Amen.

Above: The Great Seal of the Order of the Gold and Rosy Bone of the Divine Fifi-Ho-Tep-Trismegista.