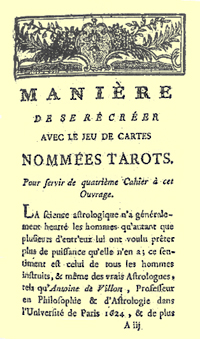 Historians and Tarot practitioners have assessed the impact of French Tarotist Jean-Baptiste Alliette (1738-1791), better known as Etteilla (his surname spelled backwards), in extraordinarily divergent ways.  Kaplan noted that opinions about him have ranged from cynical to idolatrous.1  Some traditional occult authorities, e.g., Lévi2 , 3 and Waite,4 harshly criticized his ideas and the Tarot deck which he published (c. 1788)5, faulted him for earning a living as a card reader, erroneously described him as a barber or wig-maker, and even questioned his intelligence.  For example, Waite described his books as colportage [hack writing] and his approach to Tarot as bizarre, and alleged that he took himself with high seriousness and posed rather as a priest of the occult sciences than as an ordinary adept in lart de tirer les cartes [the art of reading cards].6


More recently Giles wrote that his primary effect was in popularizing the idea of Tarot, rather than actually contributing to the theory or design of the cards.7  On the other hand, Decker, DePaulis, and Dummett have argued, Although Etteilla receives little credit in popular literature today, he can be credited with many firsts. . . .8  Indeed, Etteilla was the first:9 , 10 , 11

Among other accomplishments, Etteilla published an earlier book, Etteilla, ou manière de se récréer avec un jeu de cartes [Etteilla, or How to Have Fun With a Deck of Cards] (1770), which was dedicated to divination by regular playing cards, specifically the Piquet pack, a popular shortened deck of the day.13  Additionally, he and his followers, who included card readers trained by him,14 significantly influenced divinatory meanings assigned to Tarot cards by such leading occultists as Mathers,15 Papus,16 and Waite;17 furthermore, contemporary Tarotists still sometimes use these meanings.18

What, then, might have motivated Waite and similarly minded occultists to criticize Etteilla so harshly?  Possible explanations are numerous and the scope of this article precludes a detailed review.  However, Waites ambivalent attitude towards divination may have motivated him, in part, to disparage Etteilla.  He declared, I hate the profanum vulgus [ignorant multitude] of divinatory devices19 and noted that the seeress who can use with success a pack of divining cardseither to forecast or discernis putting in operation in the lowest degree that power from within which, if exercised with high intent for a spiritual object, might make her a saint.20  His generally low opinion of divination notwithstanding, he devoted much of The Pictorial Key to the Tarot to divination (including spreads and meanings for each card).  In fact, approximately half of the meanings depend from Etteilla and his students.  Ironically, to significant degree, he emulated Etteilla.21 , 22  Furthermore, Waite published, under the pseudonym Grand Orient, a book devoted to numerous methods of divination, including Tarot.23  Apparently, his attitude towards divination was conflicted.  Because Etteilla was the first known professional Tarotist who earned his living, in part, from reading cards, he may have served as a lightning rod, attracting the thunder and ire of Waite whose feelings about divination were so ambivalent.

Criticism notwithstanding, the historical record is clear: Etteilla did more than merely popularize Tarot.  Instead, he was a significant occultist who made significant contributions to Tarot theory, praxis, and deck design, while setting multiple striking precedents.

Especially important to this study is his precedent-setting integration of Tarot and astrology.  Prior to him the only exposition of the esoteric Tarot were two essentially speculative essays by Gébelin and Mellet in volume eight (published 1781) of the formers Le Monde primitif, analysé et comparé avec le monde moderne [The Primitive World, Analyzed and Compared to the Modern World].24  However, the authors made no attempt to relate Tarot systematically to astrology and Mellets exposition of divination by Tarot was sketchy and incomplete.  Four years later Etteilla published his Manière de se récréer .  .  .  tarots; in it, for the first time appears a systematic integration of Tarot and astrology, including the first set of correspondences between Tarot and astrology and first divinatory method which integrates Tarot and astrology.  The latter even included the first astrology-based spread.  In this book, Etteilla also wrote a sound and detailed introduction to horary astrology, providing numerous practical guidelines for users and citing multiple authorities on the subject, including Rantzau and Lenoble.25