Not sure how this depicts Death?  Click here.
BACK TO GAME BOARD

Lévi: This hieroglyph depicts Death, reaping crowned heads in a meadow where men are growing. It implies domination and force, new birth, creation and destruction.

Christian: Earthly things last only a brief space, and the highest are cut down like the grass in the fields.  But do not fear death, for death is only birth into another life. 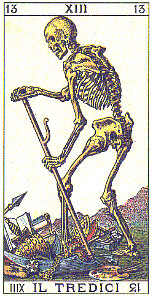 Papus: The ideas expressed by this Arcanum are those of destruction preceding or following regeneration.

Felkin: This card is the sign of transmutation and disintegration. The skeleton which alone survives the destructive power of time, may be regarded as the foundation upon which the structure is built, the type which persists through the permutations of Time and Space.

Waite: The natural transit of man to the next stage of his being either is or may be one form of his progress, but the exotic and almost unknown entrance, while still in this life, into the state of mystical death is a change in the form of consciousness and the passage into a state to which ordinary death is neither the path nor the gate.

Wirth: Death intervenes as a rejuvenator since he sets free energies which are destined to enter into new combinations of life.  We owe our transitory exitence to what we call Death.  It allowed us to be born and can lead us to rebrith.

Case: If your ideas and intellectual patterns be built in accordance with the ideas developed through the Tarot series, they will lead to a complete transformation of your personality.  The “old man” dies. One who arrives at this state can say with St. Paul, “I die daily.”

Crowley: In alchemy, this card explains the idea of putrefaction, the technical name given by its adepts to the series of chemical changes which develops the final form of life from the original latent seed in the Orphic egg.

Gray: Transformation, change.  Sometimes destruction followed or preceded by transformation.  The change may be in the form of consciousness.  Sometimes it may mean birth and renewal.

O’Neill: Remembering the Christian foundations of the Renaissance, the symbol of Death represented a transformation, not an ending.  The death in the Tarot is a passage to a higher life.  Death, at the end of life or during it, was the cathartic experience that ended the old life, but began the new life as well. 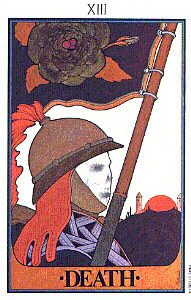 Pollack: Death, like life, is eternal and always present.  Individual forms are always dying while others come into existence.  Without death to clear away the old, nothing new could find a place in the world.

Turk: Physical death is not necessary for resurrection of the initiate, who realizes that certain elements of the lower nature must die before the Great Work can be achieved.

Symbol (top): It depicts a scythe which the figure or skeleton of this Arcanum often carries.