Not sure how this depicts The Pope or Hierophant?  Click here.
BACK TO GAME BOARD

Lévi: The Pope, or Grand Hierophant, seated between the two pillars of Hermes and of Solomon, makes the sign of esotericism, and leans upon a cross with three horizontals of triangular form.

Christian: The Hierophant represents the Genius of good intentions and the spirit of conscience; his gesture invites to meditation, to listen to the voice of the heavens in the silence of the passions and of the instincts of the flesh. 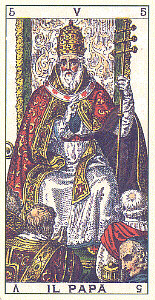 Papus: This symbol expresses the following ideas: Idea of Life, of Animation; Idea of Being; and Idea of Reunion.

Felkin: The Hierophant is the reflective or mystical aspect of the masculine.

Waite: The Hierophant is the sum total of theology, when it has passed into the utmost rigidity of expression; but he symbolizes also all things that are righteous and sacred on the manifest side.

Wirth: Keeping the middle way between tradition (rational theology) and the demands of the feelings of pious souls, the Sovereign Pontiff adapts religious knowledge to the needs of humble believers.  He also has to make the highest truths accessible to simple people.

Case: Hierophant means “revealer of sacred things.”  It was the name of the chief officer in the Eleusinian Mysteries, and signifies that which makes known the hidden import of the appearances whereby we are surrounded.  He is the pontifex, the “bridge-maker” who provides a connecting link between outer experience and interior illumination.

Crowley: The Hierophant mainly refers to the particular arcanum which is the principal business, the essential, of all magical work; the uniting of microcosm and macrocosm.

Sadhu: The element of the enlightened will-power, or the active authority is the basic idea of this Arcanum.

Gray: Preference for ritual, creed, the outer forms of religion.  Bondage to the conventions of society.  Need to conform, to be socially approved.

O’Neill: As the channel through which the grace of God reaches man, the Pope would have suggested the Hierophant, the wise man who offered Gnosis.  He would have suggested the priest of the Mystery Religions: the High Priest of Isis and the Initiator at Eleusis.  The Pope also contrasts with the Papess.  If she represented the esoteric and mysterious, the Pope must represent the exoteric, the ritual and the liturgical.

Pollack: These two meanings of this card, “outer way” and “secret doctrine”, appear contradictory on the most elementary level.  In reality they are very similar.  Whether the two acolytes are being admitted to the Church or to an occult society, they are still entering a doctrine, with a set of beliefs which they must learn and accept before they can gain entrance. 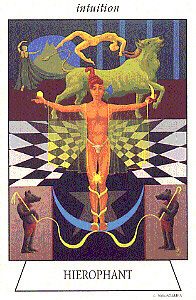 Turk: This important card represents the sacrifices you may be required to make in order to move on with your life.  In the center the figure of the Hierophant is half-hanging, as if crucified, and half-standing upon a fragile crescent moon suspended between two enclosures.

Illustration (left): The Hierophant from Navigators Tarot of the Mystic Sea by Julia A. Turk (copyright © 1996 U.S. Games Systems).  Click the image for a larger one.

Symbol (top): It is best viewed sideways and depicts a bearded man wearing a triple crown.