Not sure how this depicts The Emperor?  Click here.
BACK TO GAME BOARD

Lévi: The Emperor is a sovereign whose body represents a right-angled triangle, and his legs a cross, the image of the Athanor of the philosophers.

Christian: Nothing can resist a firm will, which has as its support the knowledge of the true and the just.  The struggle to realism these things is more than a right, it is a duty.

Papus: The Emperor’s helmet indicates the rule of the Divine Will in the Universe, and its universal action in the creation of Life.

Felkin: In the Emperor we have Ho Nike, the Conqueror, hot, passionate, impetuous, the apotheosis of Mars, whether in love or in war.

Waite: The Emperor is executive and realization, the power of this world.  He also signifies the higher kingship, occupying the intellectual throne.  Hereof is the lordship of thought rather than of the animal world.

Wirth: The Emperor is not a despot who imposes his will in an arbitrary way; there is nothing brutal about his reign: for it is inspired by a great ideal of kindness. 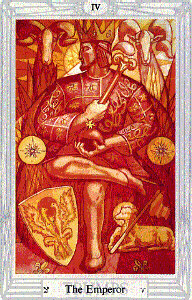 Case: The Emperor implies both government authority and paternity. He also represents the head of government, the source of war, the war-making power, and so on.  In another sense he represents the Grand Architect of the Universe, the Ancient of Days.  He is the supreme Nous, or Reason.

Crowley: The figure of the Emperor is the alchemical symbol of Sulphur, the male fiery energy of the Universe, the Rajas of Hindu philosophy.  It represents sudden, violent, but impermanent activity.  If it persists too long, it burns and destroys.

Illustration (top): The Emperor from The Thoth Tarot Deck designed by Aleister Crowley and painted by Lady Frieda Harris (copyright © 1944 Ordo Templi Orientis).  Click the image for a larger one.

Sadhu: The Emperor teaches us about the unique, self-conscious Force, existing in Man and in Nature, which is able to realize itself outwardly, that is to take a Form.

Illustration (right): The Emperor, adapted from The Tarot by Mouni Sadhu, illustrated by Eva G. Lucas (copyright © 1962 George Allen & Unwin).  Click the image for a larger one.

Pollack: In the Emperor’s best aspect he indicates the stability of a just society that allows its members to pursue their personal needs and development.  In its more negative aspects the Emperor represents the power of unjust laws in a society where stability takes precedence over morality.

Turk: He represents the primal force of blind intention that sees not where it goes, but bursts forth with great propulsive power to be thoughtfully channeled in a restrained fashion.

Symbol (top): Viewed sideways, it depicts The Emperor as a bearded, crowned man.