TODAY’S TAROT HAS IT ALL!

One of the blessings (or curses?) of contemporary Tarot is the manner in which Tarotists relate the cards to an enormous variety of theosophies, philosophies, religions, mythologies, schools of estotericism and psychology, and more.  Here is a brief list of things which have been related to Tarot.  I assure you that they have all been passionately promoted by more than a few Tarotists over the centuries.

Nudism.  One deck shows all: Stevee Postman’s The Cosmic Tribe Tarot.
Illustration (right): The Emperor from The Cosmic Tribe Tarot—the card which gives new meaning to the old expression “the Emperor’s new clothes”.  Don’t strain your eyes!  Click the image for a larger one of this hunk.  (Copyright © 1998 Postman.)

Divination.  Highfalutin term for the old-fashioned “lowly” art of fortune-telling.

Qabala, Kabala, Qaballa, Kaballa, Quaballa, Kuhbahluh, or QBL.  BTW, if G-d is so smart why doesn’t He/She use vowels and spell words one way?

Freemasonry.  Not to be confused with Operative or Inoperative Masonry. 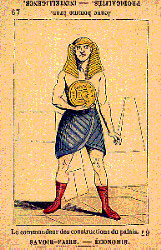 Egyptomania of the 18th and 19th Centuries.  See works by Gébelin, Etteilla, Christian, and many others.
Illustration (left): A prime example of Egyptomania.  It is not a sketch from a turn-of-the-century, second-rate production of Aïda.  Instead, it is the Page of Coins from Jeu de la Princesse Tarot (c. 1876, re-published by Editions Dusserre).  Click the image for a larger one.

Crystals.  No, not meth amphetamine.

Hemeticism.  No, not living as a recluse.

Astrology.  Including 1,327 “true” systems of Tarot correspondences at last count.

Alchemy.  No, not making gold; instead, you know, the King and Queen getting it on together.
Illustration (left): A working alchemist is depicted on the Seven of Swords from The Medieval Scapini Tarot by Luigi Scapini (copyright © 1985 U.S. Games Systems).  Click the image for a larger one.

G(g)od(dess) Worship.  For those who insist on covering all bases.

Runes.  No, not crumbling, ancient buildings.

The One True Forged Golden Dawn Manuscript.  Including the Trithemian Secret Decoder Ring.

Art of Memory.  And you definitely need it to master all 3,374 “true” systems of Tarot-Cabala correspondences.

Fairies.  No, not the Sugar Plum and Tooth types.
Illustration (right): The Empress as a fairy enthroned on a horn of plenty from Tarot of a Moon Garden by Karen Marie Sweikhardt (copyright © 1994 U.S. Games Systems).  I don’t think this deck is supposed to be funny, but it is.  Click the image for a larger one—if you can stand it.

Gnomes.  No, not the Gary Bauer type.

Sacred Geometry.  Not to be confused with Euclidian or non-Euclidean types.

Shakespeare.  Ok, Bacon and Blake too.

Mayans.  Including their wacky, wild, and totally unintelligible calendar.

Indians.  Native American, Casino, Asian, etc.
Illustration (left): The Prince of Pentacles as a Native American from The Gendron Tarot by Melanie Gendron (copyright © 1997 U.S. Games Systems).  Click the image for a larger one.

Wicca or Wicce.  That is, good old-fashioned witchery.

The Holy Grail.  You didn’t know that the Magdalene was the first cardreader ever?!

Gems.  But no card corresponds to cubic zirconium (sigh!).

Knights Templar.  Including their ever lovable Baphomet and mysterious talking head.

Satanism.  At least this is the heartfelt position of a lot of people.