Here are the dozen (twelve is a sacred number) worst things to tell a new student of Tarot who asks you which deck he or she should buy.  They’ve all been used, I assure you!

12.  “Pick a deck which speaks to you.”  Suppose an otherwise perfectly good deck can’t speak? 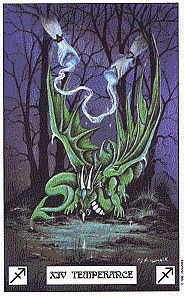 10. “Pick a deck which makes you think long and hard.” Oops! My mistake; no one ever says this.

8.  “Buy the Rider-Waite-Smith; it’s easy to understand.”  LOL! You might as well recommend The Pictorial Key to the Tarot and other books by Waite.

Illustration (above): Temperance from the deck the author loves to hate, The Dragon Tarot, by Peter Pracownik & Terry Donaldson (copyright © 1996 U.S. Games Systems).

7.  “Don’t buy the Rider-Waite-Smith; it fails to reflect the diversity of humankind.”  But which deck does?

4.  “Buy XYZ deck; I plumb wore my first copy out.”  BTW, if it is The Tarot of Baseball you’re up the stream without a paddle—even if you have a bat.

2. “Don’t buy the Tarot of Marseilles; the pip cards aren’t illustrated; you’ll have to memorize their meanings.”  Something wrong or unspiritual about studying?

And the absolutely worst thing to tell a new student:

1. “Don’t even think of buying a deck; you must wait for someone to give you one.”  If it’s the Dragon Tarot you’re out of luck!