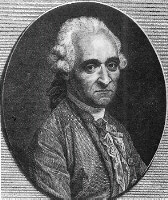 Antoine Court, the son of a French Protestant pastor, was born in Switzerland, probably in 1719.  However, historians are uncertain; he may have been born as late as 1728.  Upon completion of his studies in the seminary in 1754, he too was ordained a pastor.

He entered France in 1762 and published Les Toulousaines ou lettres historiques et apologétiques en faveur de la religion réformé [The People of Toulouse or Historical and Apologetic Letters in Favor of the Protestant Religion].  By this time he was using the full name by which he would be best known: Antoine Court de Gébelin.  His book was an account of Jean Calas, a Protestant merchant who was unjustly executed for the murder of his son, who had converted to Catholicism.  Voltaire, the celebrated French philosopher and author, although very supportive of the Calas cause, attacked the book because, for one thing, it passionately promoted Protestantism.

Later Court de Gébelin visited Protestant communities throughout France and permanently settled in Paris, where he opened an office and advocated on the behalf of these sometimes persecuted communities.  He was even appointed a royal censor, a remarkable achievement for a Protestant.  During the final dozen or so years of his life he pursued esotericism and plunged into the popular world of freemasonry, which had hundreds of lodges in France, claiming thousands of members.

Court de Gébelin was initiated into feemasonry at the Parisian lodge Les Amis Réunis in 1771.  Subsequently he joined the lodge Les Neuf Soeurs, where in 1778 he assisted in the initiation of his former critic Voltaire, which attracted such notable fellow masons as the astronomer Lalande, the naturalist Lacépède, the sculptor Houdon, and the American ambassador to France, Benjamin Franklin.

Although many freemasons were more interested in socializing or politicking than exploring philosophical or spiritual matters, a significant number enthusiastically embraced nonconformist philosophies and occultism.  Some members learned about classical mythology and ancient cultures thanks to freemasonry and, at least occasionally, marked pagan holidays.  For example, popular masonic almanacs, usually French, often contained calendars which described each month from the perspective of Roman mythology.  In 1793 Amsterdam freemasons even celebrated the Roman pagan Saturnalia on Christmas day.

Sometimes lectures at lodges centered on alleged ancient wisdom traditions.  One Dutch freemason wrote in 1794 that a speaker at his lodge “entertained us with the customs of the ancient Egyptian Priests to transmit the heroic deeds or the histories of the country to posterity by way of metaphoric symbols”, according to Margaret C. Jacob’s Living the Enlightenment: Freemasonry and Politics in Eighteenth-Century Europe (1991).

In addition, Court de Gébelin founded and served as president of the Société Apollonienne (later called the Musée de Paris), a society dedicated to the arts and sciences.  He was also a founding member of the Philalèthes, an esoteric fraternity with ties to freemasonry and the mystical sect Élus Coens (Elect Cohens).

Clearly, Court de Gébelin enjoyed abiding interests in religion, esotericism, and learning, which, in part, motivated him, to produce his major literary work, Monde primitif, analysé et comparé avec le monde moderne [The Primitive World, Analyzed and Compared to the Modern World].  It attracted over one thousand subscribers, including the French royal family (which ordered one hundred copies), the renowned author and encyclopediast Diderot, the philosopher d’Alembert, and Benjamin Franklin.  Court de Gébelin published nine volumes between 1773 and 1782; his death in 1784 prevented him from finishing.

In Monde primitif, Court de Gébelin sought to reconstruct the primeval civilization.  Following in the footsteps of some leading Renaissance scholars, he alleged that this civilization had been universal, intellectually advanced, and spiritually enlightened.  The book centered on two major areas of concern: (a) linguistics and (b) mythology and symbology.  With regard to the former, Court de Gébelin presented dictionaries of etymology, what he called a universal grammar, and discourses on the origins of spoken and written language.

With regard to mythology and symbology, he discussed the origins of allegory in antiquity and a history of the calendar from civil, religious, and mythological perspectives.  In addition, he presented the first known published essays on Tarot. He included two: one by him and another attributed to “M. le C. de M.***”. Historians have determined that this author’s full name was Louis-Raphaël-Lucrèce de Fayolle, Comte de Mellet, an eighteenth-century French noble and cavalry officer about whom little is known.

Tarot as an Ancient Egyptian Artifact

In his essay, Court de Gébelin described his first encounter with the cards (excepting as a child) in approximately 1773-1778 while visiting a friend who had arrived from Switzerland or Germany.  While she was playing the game Tarot, he glimpsed the cards, interrupted the playing, and began to inspect them.  Having long ago fallen into disfavor in Paris, Tarot cards were virtually unknown by its residents.  However, Court de Gébelin reported that he immediately understood Tarot’s origins and symbolic content.  He recalled his experience in Monde primitif in almost mystical terms:

“. . . I glanced at it [the World] & immediately understood the Allegory.  Each person stops playing and comes to see this marvelous Card wherein I perceive what they have never seen.  Each person shows me another: in a quarter hour the deck has been gone through, explained & declared Egyptian and such that it was not a trick of our imagination but the product of the deliberate associations and feelings of the deck with everything which one knew of Egyptian ideas.” 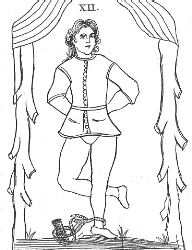 Referencing illustrations adapted from the Tarot de Marseille for his book, Court de Gébelin discussed each Trump and the Fool.  He asserted that the figure of the Hanged Man should be right side up and really depicted the virtue Prudence (see illustration, left).  He claimed that the Chariot pictured the Egyptian god Osiris in triumph; the Devil showed Typhon, a Greek god often associated with the Egyptian god Set; the Star comprised the bright star Sirius and seven traditional “planets”; Judgment actually depicted the creation of the world; and the World really symbolized Time.  Furthermore, he claimed that the correct order of the Trumps was reversed, beginning with the World and ending with the Juggler (later called the Magician).

Illustration (above): Prudence from Court de Gébelin’s Monde primitif (1781) (corresponds to the Hanged Man from the Tarot de Marseille and similar traditional decks).  Click the image for a larger one.

He also asserted that the four suits symbolized social groups.  He wrote that Swords represented the sovereign, nobility, and military; Cups, the clergy or priesthood; Batons (later called Wands), those concerned with agriculture; and Coins (later called Pentacles), the merchant class.  To round things out he also presented rules for the game of Tarot.

Unfortunately, Court de Gébelin generally failed to use rational argument or present even a scrap of convincing evidence for his positions.  Typically, he was purely speculative and one might describe his methodology as intuitive at best.  Modern linguists and historians have long rightly rejected as absurd many of his ideas, including the notion that Tarot was an ancient Egyptian artifact.