A Brief Explanation of The Aeon

Crowley wrote in the The Book of Thoth that The Aeon replaces the traditional Trump called Judgment and references the New Aeon which began in 1904.  According to him and The Book of the Law, the philosophy-religion Thelema would dominate this era. 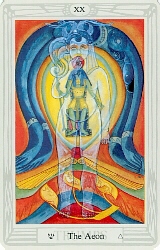 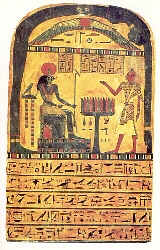 Aeon (see illustration, extreme left) depicts, in large part, the god Horus, who is most closely associated with this new spiritual era which is to last approximately 2,000 years.  Hoor-pa-kraat (Harpocrates), a manifestation of Horus as a child, appears as the dominant, semitransparent, standing figure.  Following traditional Egyptian iconography, Harris paints him with side lock and finger raised to his mouth.

Another manifestation of Horus, the hawk-headed Ra Hoor Khuit, appears enthroned just behind the Hoor-pa-kraat.  Enveloping both manifestations of Horus in the protective curve of her body, rendered in shades of deep blue, is Nuith, Horus’ mother.  The depictions of Ra Hoor Khuit and Nuith also follow traditional Egyptian iconography.  Indeed, they appear in similar fashion on the funerary stele of the Egyptian priest Ankh-af-na-khonsu (XXV Dynasty, c. 751-656 B.C.) (see illustration, above right), which is held sacred by Thelemites who commonly call it the “Stele of Revealing”.  Furthermore, Crowley asserted that he was a reincarnation of Ankh-af-na-khonsu (pictured in a leopard skin on the extreme right of the stele).

Returning to Aeon, one finds another Thelemic god,  Hadit, husband of Nuith and father to Hoor-pa-kraat, who hovers beneath them as as red disc with gold wings – again similar to the Stele of Revealing.

Illustrations (above, left to right): The Aeon from the Thoth Tarot designed by Aleister Crowley and painted by Lady Frieda Harris (copyright © 1944 Ordo Templi Orientis); and the Stele of Revealing (from The Law is for All: The Authorized Popular Commentary on Liber AL vel Legis sub Figura CCXX The Book of the Law by Aleister Crowley) (copyright © 1996 Ordo Templi Orientis). Click images for larger ones.

The hot red-orange zones of Aeon, which even include flames, reference Elemental Fire which is associated with this Trump.  Fire also harkens back to the Old Aeon notion of the Final Judgment because an obliterating fire was to precede Judgment Day.

At the feet of Hoor-pa-kraat appears a Shin (

) painted in gold, which references Hebrew letter mysticism (an aspect of Cabala, a kind of Jewish mysticism).  It also harkens back to the Old Aeon and Judgment because, according to Crowley, the traditional Judgment Trump typically included three rising figures, the central one approximating the shape of a Shin with outstretched arms bent at the elbows.  He may have been referring to Tarot de Marseille decks which typically feature three rising figures and/or Rider-Waite-Smith decks which show a central figure approximating the shape of a Shin (see highlighted portions of illustrations, above).  Further, the three rising figures of Judgment are reflected in the three fetus-like figures of Aeon, located in the prongs of the Shin, where they are rising to participate in the new spiritual era.

Finally, behind the Shin are curving blue and red-orange zones which suggest the upper portion of the symbol for the zodiacal sign Libra (

), according to Crowley, because the next aeon will be associated with Libra.  Clearly, although this Trump principally depicts the Current or New Aeon it also looks back to the Old Aeon and forward to the next one.

With this card, Crowley and Harris created a complex visual and spiritual statement.  Using the Old Aeon’s notion of Judgment as a foundation, they drew upon The Book of the Law, astrology, Hebrew letter mysticism, and Egyptian iconography to create an imaginative, bold summary of Thelemic theology located in the context of spiritual eras or aeons.