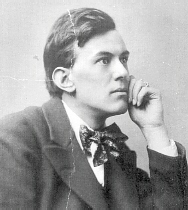 Edward Alexander Crowley, who called himself Aleister Crowley, was born the son of Edward and Emily Crowley in 1875 in Warwickshire, England.  Aleister’s father was independently wealthy thanks to his father, a Quaker who had amassed a fortune as the owner of a brewery which produced Crowley Ale and pubs which sold it.

Aleister’s parents were devout members of an English Protestant fundamentalist sect called the Plymouth Brethren, whose adherents believed in the literal truth of scripture and the immanent return of Christ.  The Crowley family studied the Bible regularly and Aleister’s father was a lay preacher.  According to Crowley, his mother dubbed him “the Beast” when he was still a child.  He quickly identified with the title and for the rest of his life he viewed himself as the Beast of the Apocalypse, the enemy of Christianity.  Clearly, from an early age the future magus had developed a strong distaste for Christianity.

The young Crowley.  From Do What Thou Wilt: A Life of Aleister Crowley by Lawrence Sutin (copyright © 2000 Sutin).  Click the image for a larger one.

A significant portion of Aleister’s boyhood was spent in private, religious boarding schools for boys, including one run by the Plymouth Brethren.  There, against his will, he studied fundamentalist Christianity and attended prayer services and sermons daily.  Additionally, school masters sometimes inflicted harsh corporal punishment on students, including Crowley, for even relatively minor infractions or expressing opinions which deviated from Christian fundamentalism.  In 1887, when Crowley was only eleven, his father died, leaving him a legacy which made him wealthy.

The Magus is Born

Pursuing his interest in occultism, Crowley was initiated into the Hermetic Order of the Golden Dawn at its Isis-Urania Temple in London in 1898.  The order was a relatively small but influential organization of esotericists founded in London ten years earlier by S.L. MacGregor Mathers and two other occultists.  Initiates, especially those who advanced to the “Second Order”, pursued an eclectic form of magic as a spiritual discipline.

Crowley soon befriended Second Order member Allan Bennett; together they studied magic and mysticism extensively.  He also became the protege and ally of Mathers, the order’s autocratic leader, who lived in Paris, where he had opened the Golden Dawn’s Ahathöor Temple.  However, in London, he alienated some leaders of the order, including the renowned Irish poet William Butler Yeats.  They apparently objected to Crowley’s purported pornographic writings, blasphemy, and immoral lifestyle.  When, in 1900, Crowley applied for admission the Second Order, the leadership of Isis-Urania turned him down.  However, he soon travelled to Paris, where Mathers admitted him.

Upon his return, the leadership of Isis-Urania, openly defying Mathers, refused to recognize his entry into the Second Order.  Matters went from bad to worse.  At Mathers’ request, Crowley attempted to seize property of Isis-Urania, including confidential documents and temple furnishings.  When this failed, claiming ownership of the property, Crowley sued Isis-Urania, which in turn sued him.  He soon realized that he would expose himself to significant risk and an ugly legal battle; therefore, he filed for voluntary dismissal.  The fight ended in Crowley’s and Mathers’ defeats; ultimately the former departed from the Golden Dawn and the latter lost control of Isis-Urania.

In 1901 Crowley visited his old friend Bennett, who was then living in Ceylon, where he had been studying under a Hindu yogi.  Upon arrival, he took thorough instruction from him in Buddhism, Hinduism, and yoga.  During this demanding period he regularly practiced intense yogic breathing exercises, including pranayama.  He also regularly meditated for lengthy periods, later reporting that he achieved such lofty states as dhyana.

Returning to England, Crowley married Rose Kelly, the sister of his friend, artist Gerald Kelly, in 1903.  The happy couple enjoyed a lengthy honeymoon in Scotland, Paris, Marseilles, Naples, and, finally, Cairo.  In the last named city something happened which changed Crowley’s life forever.  According to his own testimony, over a period of three days, April 8-10, 1904, he received The Book of the Law (also called Liber AL vel Legis) from a discarnate being named Aiwass (also spelled Aiwaz), who audibly dictated it while Crowley recorded.  No independent witnesses were present to confirm the phenomenon.

This short, enigmatic work, comprised of only three chapters, served as the fundamental scripture of Thelema (Greek for Will), which Crowley founded and promoted as the philosophy-religion of the “New Aeon”.  The Old Aeon, according to the magus, had been dominated by the notions of sin, restriction, the dying god (e.g., Osiris, Dionysos, and Jesus) and such religions as Judaism, Christianity, Islam, Hinduism, and Buddhism.  The New Aeon, which began in 1904, would be dominated by individual freedom and joy, Thelema, and the god Horus, who, with Nuit and Hadit formed a trinity.  According to Thelemic teaching, Nuit, traditionally the Egyptian goddess of the night sky, connoted infinite expansion or space.  The god Hadit, sometimes depicted as a winged disc, connoted infinite contraction or point.  Finally, their son, Horus, connoted, in addition to the New Aeon, the manifest universe.

The scope of this article precludes detailed discussion of the complexities of Thelema.  However, Crowley’s frequent use of a brief quotation from The Book of the Law as a pithy summary of Thelemic teachings merits brief attention here, viz., “Do what thou wilt shall be the whole of the Law”.  Crowley’s penchant for frequently repeating this aphorism is revealing in at least two ways.  First, it shows the magus as a center of controversy; the saying has been easily interpreted as an amoral license for self-indulgence and disregard of others.  Second, it shows that upon study some of his ideas were not as controversial as they might first seem.  Specifically, he explained that this quotation referred to following one’s true will, which, by definition, entailed acting in careful harmony with the universe – like the Taoist sage who effortlessly follows the eternal Tao (i.e., Divine Path).  Additionally, he explained that following one’s true will had as its final goal – not self-indulgence – but the “Great Work”, i.e., mystical union with the Divine.

Shortly after receiving The Book of the Law, Crowley and Rose visited Paris and returned to England, where she gave birth to the couple’s first child.  They named her Nuit, after the goddess.

In 1905 Crowley led the first expedition to attempt to climb the third highest mountain in the world, Mount Kanchenjunga (28,208 feet), located in the Himalayas.  Having taken up mountaineering in 1898, Crowley had frequently excelled at this sport in the Alps and elsewhere thanks to his considerable skills, physical stamina, and courage.  However, the ill-fated Kanchenjunga expedition suffered from multiple problems which ultimately proved fatal.  Prior to the ascent, Crowley failed to ensure the recruitment of well qualified, compatible expedition members.  During the ascent he managed them poorly; some of the porters even deserted.  Morale of the men was poor and great tension and animosity existed between Crowley and many of the them.  Impassioned arguments even broke out over his choice of route.

At camp five (21,000 feet, according to Crowley) things came to a head: six of the men (including three porters) mutinied and began to descend, while the magus remained with the rest of the expedition.  During their descent four men fell and triggered an avalanche which buried them.  The remaining two, still within earshot of Crowley, cried for help as they set to extricating their comrades.  However, he did nothing, waiting until the next day to descend.  Two days later the bodies of the dead men were recovered.  Crowley and other expedition members reported the events to the press.  Many members of the public and mountaineering clubs found Crowley’s behavior reprehensible.  Thus, the Kanchenjunga expedition ended in tragedy, failure, and permanent damage to Crowley’s reputation as a mountaineer.

Spiritual Retreat in the Wilds of China

Nevertheless, the magus continued his world travels and adventures.  For several months during 1905-1906 he undertook a dangerous trek on pony through the wilds of southern China.  Amazingly, Rose joined him.  Even more amazingly, they brought their one-year old daughter!  For Crowley the journey became a lengthy, intense spiritual retreat.  For it he sought inspiration from two major sources.  The first was a grimoire (magical book) titled The Book of the Sacred Magic of Abra-Malin the Mage, which had been translated from French by Mathers and included diverse prayers, ceremonies, and magical techniques.  The second was the “Bornless Ritual”, an invocation (purportedly of ancient origins) used by Golden Dawn members.

Crowley’s goal was what the Abra-Malin grimoire and Golden Dawn members called “Knowledge and Conversation of the Holy Guardian Angel”, i.e., mystical union with one’s Guardian Angel (or “Higher Self”).  During the journey he doggedly performed the invocation daily.  Even after the journey he continued to perform it regularly.  Finally, after approximately three months he began to enjoy results.  He reported in his diary in May 1906, “Vision quite perfect; I tasted the sweet kiss and gazed in the clear eyes of the Radiant One [i.e., his Guardian Angel or Higher Self].  My own face became luminous.”  Such was Crowley’s determination, dedication, and self-discipline with regard to spiritual development. 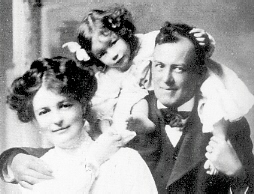 Following the trek through China, Crowley left Rose and Nuit in India.  The plan was for him to return to England via the Pacific and United States, and Rose and Nuit to return via a more direct route which would include the Suez Canal and Mediterranean.  Arriving home, Crowley learned that his daughter had died of typhoid in India and Rose had descended into alcoholism.  Crowley, grief stricken, unfairly blamed the death on his wife.  Nevertheless, in the summer of 1906 Rose gave birth to the couple’s second child, Lola Zaza (see illustration, above).  However, their marriage was doomed.  For years Crowley had been having affairs, which took their toll on Rose.  He agreed to allow her to divorce him on grounds of adultery.  Their marriage ended in 1909.

The Crowley family in 1909. Pictured are (left to right) Rose, Lola Zaza, and Aleister.  From Do What Thou Wilt: A Life of Aleister Crowley by Lawrence Sutin (copyright © 2000 Sutin).  Click the image for a larger one.